Auckland is at ORANGE - for information about what this means for you, click here

Te Hauturu-o-Toi / Little Barrier Island lies at the northern end of the Hauraki Gulf between Aotea / Great Barrier Island and Leigh on the mainland. This is Aotearoa / New Zealand’s largest island nature reserve north of the subantarctic islands.

The forest-clad Te Hauturu-o-Toi was originally formed by a large volcano. It rises steeply from sea cliffs up to 250 metres high to the highest point at 722 metres above sea level.

Te Hauturu-o-Toi is considered to be one of the most important nature reserves in the world. It is possibly Aotearoa / New Zealand’s most intact, undisturbed ecosystem. The island supports the country's most diverse native bird and reptile communities.

There is a diverse range of ecosystems on the island including:

The island supports one of only two examples of kauri, tōwai, rātā, montane podocarp forest (MF25) in Auckland. The other is on the high peaks of Aotea / Great Barrier Island.

Species of Astelia line this track which leads to the summit of Mt Hauturu on Little Barrier.
Photo credit: Jane Andrews 2017

There are populations of many threatened species on the island including:

For seabirds, Te Hauturu-o-Toi is extremely important. It is currently the only known breeding site for the New Zealand storm petrel. Approximately 98 per cent of Cook’s petrel nest on the island. There is a small but significant number of takoketai (black petrel) also nesting there along with:

Te Hauturu-o-Toi is the only place that hihi (stitchbird) are able to survive without human assistance. It also provides a vitally important refuge for a number of other threatened native species introduced to the island including: 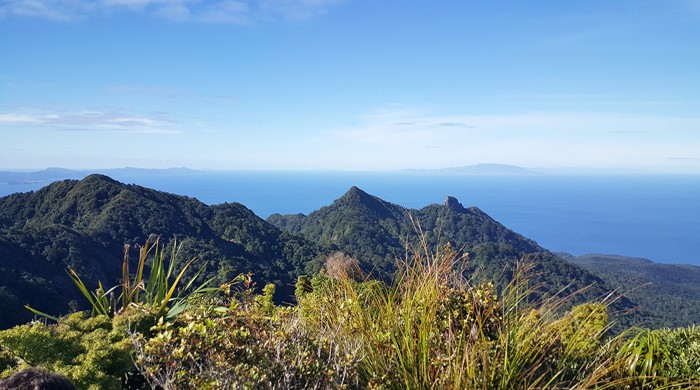 The view from the summit of Mt Hauturu on Little Barrier, Great Barrier Island can be seen to the east with the tip of Coromandel Peninsula to the south.
Photo credit: Jane Andrews 2017

Te Hauturu-o-Toi was less impacted by animal pests than other parts of Aotearoa / New Zealand, with only cats and kiore (Pacific rat) establishing. These were eradicated from the island by 1981 and 2006 respectively. Native species populations continue to recover following these eradications.

Te Hauturu-o-Toi was inhabited by Ngāti Manuhiri, Ngāti Rehua and Ngāti Wai until the island became Aotearoa / New Zealand’s first nature reserve in 1895. In 2012, Ngāti Manuhiri were formally recognised as kaitiaki or guardians of Te Hauturu-o-Toi in a Treaty of Waitangi settlement. Ngati Manuhiri gifted the island to the people of Aotearoa / New Zealand and now co-govern the reserve with the Department of Conservation.

The Department of Conservation strictly regulates visitor numbers and movements to protect the island's biodiversity. 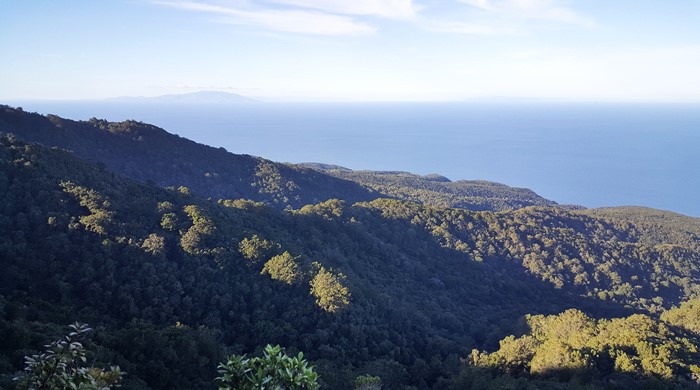 Gravelfield and stonefield ecosystems are rare in Auckland, developing on beach ridges. The diversity of plant communities that establish here depend on the age of the gravels and proximity to the shoreline.

Find out how you can donate, become a supporter or volunteer for Little Barrier Island Supporters Trust.