Manukau Domain is a forest-clad public reserve on the north-east coast of the Manukau Harbour in Lynfield. Steep south-west facing hillslopes surround a central gully system. A short coastal stream drains the lower part of the reserve and flows into the harbour.

The forest cover extends beyond the reserve boundaries around the coast through a network of local reserves, creating a valuable ecological corridor along the harbour edge.

The native vegetation within the reserve is mostly regenerating scrub (VS2) with an abundance of gumland-like species. The vegetation includes a canopy of mānuka and kānuka, along with species such as māpou, karamu, tauhinu, harakeke (flax), bracken and sword sedge.

The regenerating scrub transitions into coastal forest (WF4) which surrounds a central gully system and extends to the coast. There are large pōhutukawa, titoki and many pūriri here. Growing on the coastal edge (CL1) are houpara, harakeke, wharariki and coastal cutty grass. Grass-leaved greenhood orchid, tetraria (a leafless native sedge) and a native mistletoe species are also found within the reserve. 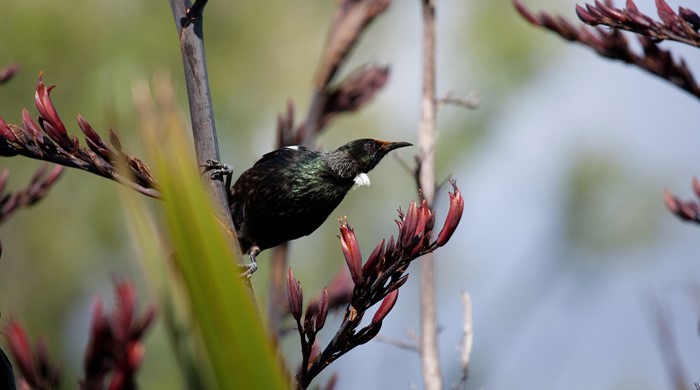 The vegetation within the reserve provides habitat for forest birds such as:

Information on the Manukau Domain pathways

Discover a unique part of Auckland in this scenic walk through Manukau Domain in Lynfield. Enjoy panoramic harbour views and explore the northern shores of the Manukau Harbour.