The Spragg Monument biodiversity focus area is situated on a small headland between Cornwallis and Huia at the southern end of the Waitākere Ranges. It overlooks the Manukau Harbour.

The monument is in memory of Wesley Spragg's son and also to honour “All the Boys of Auckland” who died in World War One. Wesley Spragg was a business man who had a strong love of native bush. He donated over 800 acres of native vegetation including Kaitarakihi Park in the Waitākere Ranges to the people of Tāmaki Makaurau / Auckland. 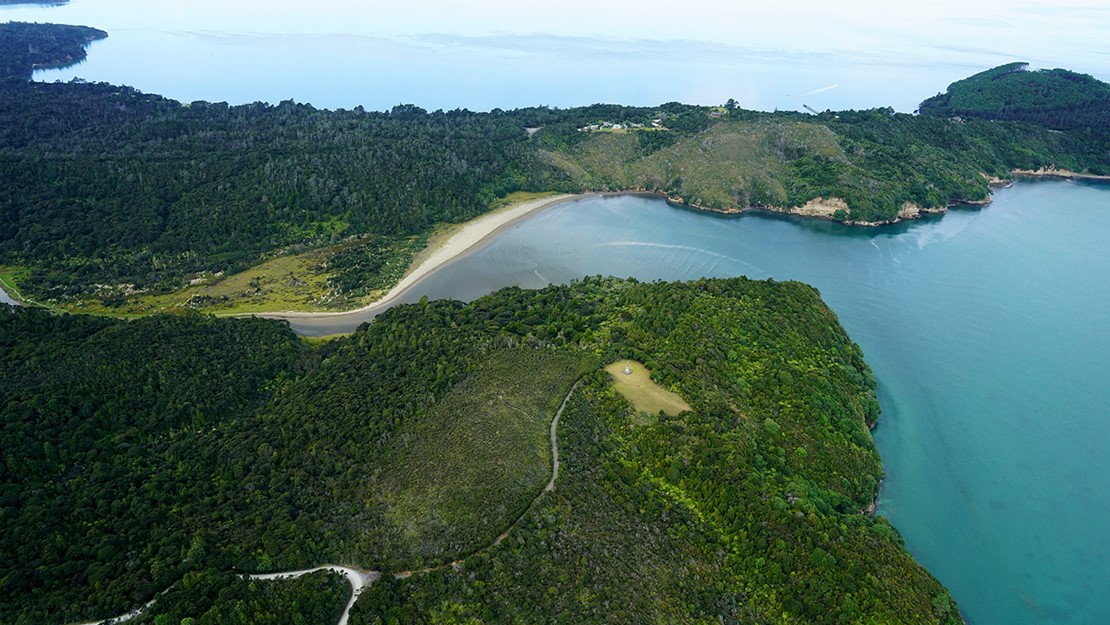 Around Spragg Monument, the stunted gumland vegetation can be seen in this birds eye view of Kakamatua Point and inlet.
Photo credit: Andrew Macdonald, Biospatial Ltd 2019

The vegetation at Spragg Monument has long been recognised as one of Tāmaki Makaurau /Auckland’s best remaining examples of gumland (WL1). Gumlands were once much more widespread, but have been irreversibly altered due to frequent fires, clearance for urban development and weed invasion. Because of the loss of gumland areas, this ecosystem type has a regional threat ranking of Critically Endangered.

Gumlands tend to occupy soils where kauri leaf litter has altered the soil chemistry, creating low levels of soil fertility and poor drainage. The soils become water-logged during periods of heavy rain. Gumland sites have usually had a history of frequent fire disturbance which progressively lowers the soil fertility even more.

Only native plants tolerant of these conditions establish in gumlands. Sometimes there are only a few species present. At this site there is a good range native plant species including:

Mātātā (fernbird) and native lizard species have been recorded within the Spragg Monument and the surrounding vegetation. These species are commonly associated with gumland vegetation.

Hakea, an exotic weed species adapted to gumland environments was widespread at this site until recently. It has been controlled through the gumland habitat. Ongoing effort is required to manage weed invasion.

Myrtle rust is identified as a potential risk to the health of the mānuka-dominated gumland vegetation.