This biodiversity focus area is situated within Waitākere Ranges Regional Park. It sits on the margins of Karekare Stream before the stream flows onto Karekare Beach.

A public boardwalk extends through the northern section, connecting the public carpark to the surf club and beach. 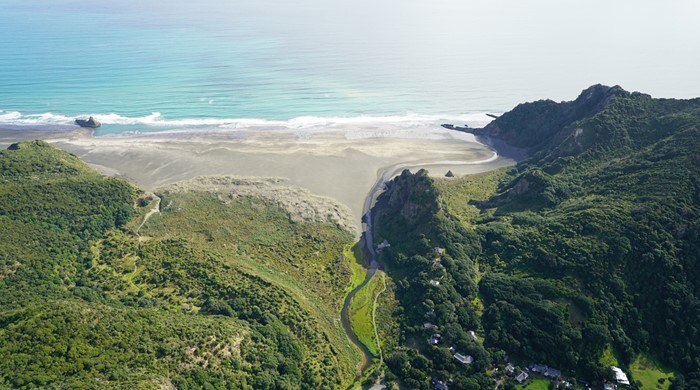 The Karekare Dunes looking west with small Paratahi Island in the south and Union Bay in the north. The dynamic foredunes here include spinifex, pingao and marram grass with heavily vegetated but stable backdunes. The beach and Union Bay dunes are in constant flux due to the changing amount of sand being deposited.
Photo credit: Andrew Macdonald, Biospatial Ltd 2019

This area has a good example of the oioi, restiad rushland and reedland (WL10) ecosystem type. This ecosystem is common in the freshwater parts of estuaries, coastal stream margins and in some inland areas near lakes.

It is an ecosystem much reduced from its original extent due to land-use impacts from urban development, conversion to agriculture and more. It has a regional threat ranking of Endangered.

Species that are commonly found in this ecosystem type include:

Pūrua grass is the dominant species at this location. Water milfoil, a native herb which grows mostly in the water, grows on the edge of the usually slow-moving Karekare Stream.

Karekare is a popular surf beach, and a coastal settlement in Waitākere Ranges Regional Park.